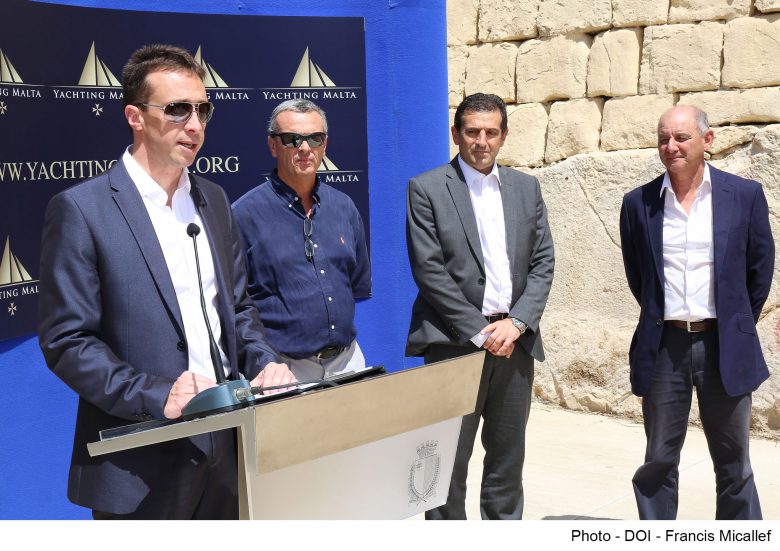 In a press conference held this afternoon at the newly allocated Vikings Sailing Club premises in Hay Wharf, Yachting Malta reported a number of initiatives embarked upon as part of its mission to develop the potential of Yachting in Malta.

Yachting Malta has been instrumental in ensuring that the Vikings Sailing Club continued its operations by assisting the Club in the commencement of refurbishment works to ensure that their new premises are operational. Throughout the years, the Vikings Sailing Club has contributed extensively to the development of various generations of sailors from diverse social backgrounds. It was thus paramount that Yachting Malta offered it’s support in line with one aspect from Yachting Malta’s mission statement: “To foster and promote sailing, with emphasis on the young. This includes the promotion of education and training in the fundamentals of sailing, racing, and water safety”.

Through Yachting Malta’s intervention and the collaboration of the Royal Malta Yacht Club, the Vikings sailing Club were also able to bring their boats out from storage enabling them to continue offering Skolasport’s On the Move sailing lessons on Laser 16 and Topper (single handed) sailing boats from the Royal Malta Yacht Club premises. An excellent example of good will and mutual collaboration between sailing clubs.

Other initiatives saw Yachting Malta’s contribution towards the Royal Malta Yacht Club sailing development programs. The first initiative was the support of the International Council of Yacht Clubs European Conference, which saw a number of European Clubs sharing best practices in a two-day conference hosted at the Club.

Yachting Malta also assisted the Club’s Sailing School to increase their fleet of boats with the introduction of the RS Feva class. The addition of these boats will enable the Royal Malta Yacht Club to cater for more people interested in sailing.

A similar initiative was also undertaken with the Birzebbuga Sailing Club, whereby the club was supported to be able to purchase two new boats – an optimist and an RS Feva. Thanks to the introduction of the RS Feva’s a group of 8 sailors have found a renewed sense of enthusiasm after growing out of the optimists.

Yachting Malta has also supported the forthcoming Pageant of the Seas being held in Grand Harbour on the 7th June, organised by the Valletta 2018 Foundation to commemorate the 450th anniversary of the laying of Valletta’s foundation stone. The Event will see 27 yachts with EU flags making a synchronised entry into the Grand Harbour as part of the spectacle.

“We started in 2015 by supporting the Sport directly, enabling Clubs to develop and grow further. As from 2016 Yachting Malta adopted a shift of strategy. We will soon be issuing a public call for ‘new’ sailing and power events. We are standby to support individuals, clubs and organizations who are willing to organize new yachting events and initiatives. In close collaboration with MIMCOL, Yachting Malta will assist in the development of a ‘cost benefit analysis’ & ‘economic impact assessment’ related to new yachting events. Such professional exercises will help quantify the economic overspill brought about by yachting events and serve as a means to garner further support for their implementation. YM will also serve as a ‘one-stop shop’ to assist yachting event organisers especially from a bureaucratic & expediency point of view. The objectives of Yachting Malta are two fold – that of developing our home grown talent but also tapping into huge potential Malta has as an international yachting events destination”. Stated Wilfrid Buttigieg, CEO Yachting Malta.

The Press Conference was also addressed by the Hon. Chris Agius, Parliamentary Secretary for Research, Innovation, Youth and Sport Chris Agius stated that the Government understood the plight of the Club, and worked towards finding an alternative solution until work began on the new premises. The Government understood the work Viking Sailing Club was undertaking to develop not only the sport of sailing but also with the young children and youths. The Parliamentary Secretary said that it was not easy to find an alternative site that offers similar facilities that the Club enjoyed, especially since the Club’s facilities had to be located by the sea in order to launch their boats. These obstacles are overcome and now thanks to a financial grant from Yachting Malta, together with the commitment of club volunteers, Vikings have now returned to a deserving site. Hon. Agius reminded those present that Vikings Sailing Club will be offering sessions as part of ‘Summer on the Move programme organized by Sport Malta throughout the summer. Applications for this programme are now open.

A number of other initiatives are also being developed and will be announced shortly.