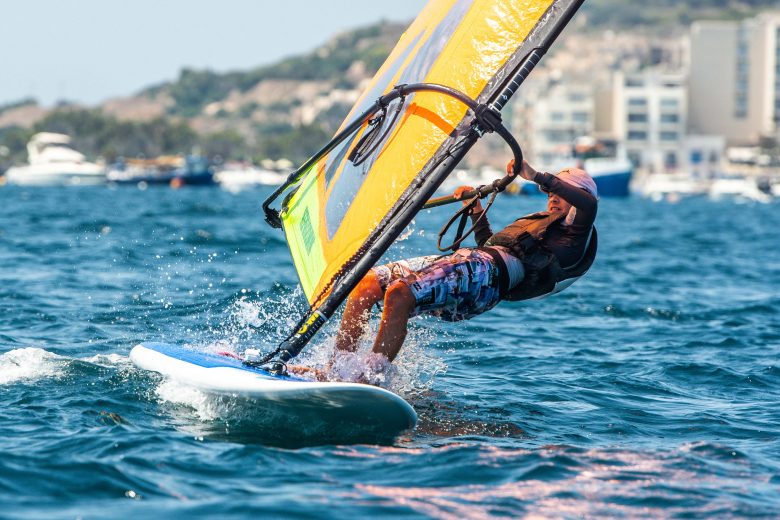 The eighties and early nineties can easily be described as the golden years of windsurfing in Malta. Local bays were awash with surfers riding the waves and making the most of the favourable Mediterranean winds.

Throughout these years several Maltese names were etched in international windsurfing history. Some of the leading protagonists of the sport were Peter Bonello, who represented Malta in the 1984 Summer Olympic Games in Los Angeles and obtained Malta’s best ever placing in such games at the time. Fellow surfer Jean Paul Fleri Soler competed in two editions of the Summer Olympic Games – 1988 South Korea and 1992 Barcelona. Andrew Wilson was another Maltese windsurfer who represented Malta in the men’s Mistral One Design event at the 1996 Summer Olympics in Atlanta. Whilst Francesca Vincenti never made it to the Olympics. due to the fact that no competitions for females were available at the time, yet she produced a list of honours for Malta from her participation in the international sphere, ranking among the top 10 at World, European and Pre-Olympic championships.

Sadly, Windsurfing’s popularity started to wane in the 1990s.  After a long hiatus, a group of sailors from the Malta Young Sailors Club started focusing their attention to windsurfing again. With the help of Jean Paul Fleri Soler – who is very present in the local sailing scene, regular training started taking place.

The promoters then approached Yachting Malta and subsequently the St Paul’s Bay Local Council for assistance in organising a two-day windsurfing festival which was held between the 8th and 9th August at St. Paul’s Bay. The objective of this weekend festival was twofold – one to provide a racing environment for those surfers who had been training in the past months and the other to generate interest amongst the general public.

The two-day windsurfing festival held between the 8th and 9th August in St. Paul’s Bay has proven to be a success.  The festival attracted a good mix of veterans and rookies who experienced some excellent racing conditions.  Amongst the veterans taking part were the Fleri Soler siblings – Jean Paul and Mark, Albert Fenech and Ray Agius Condachi.  The younger participants saw the likes of Zach Zammit, Karl Miggiani and Benjamin Vassallo.

Participants were divided into four Classes – Long Board Open Class, Windsurfer LT One Design Class, Slalom and Beginners Class – the latter class was open to those with less than two years windsurfing experience. Sailing took place on a triangular course for long boards, LT Class (One Design) and Beginners. Although having the same course, classes were scored separately.  The Slalom course was designed to be a reaching course, whilst the freestyle competition was an individual three-minute timed run in which surfers were required to carry out various combinations of sail and board movements.

The Juniors’ Category provided some very competitive and enthusiastic racing.  The participants, under the watchful eye of Jean Paul Fleri Soler, competed in a total of three races.  Benjamin Vassallo emerged winner of this Class.

Zach Zammit was the clear winner of the Slalom Class. Unfortunately, despite their wish to have more races in this category, wind conditions on Sunday prevented such races to take place.

The Long Board LT Class, which has seen a rise in popularity, saw the largest wave of participants who raced a total of eight races.  Despite not having competed for over two decades veteran Jean Paul Fleri Soler gave a demonstration of his expertise and dexterity.

Similarly, his brother Mark, who had just returned from a successful showing in the Italian National Championships, the previous week where he placed, seventh overall and third in the light-weight class, showed that surfing still remained well and truly in their blood.

Due to wind conditions not favouring the short boards, this category saw three races taking place.

“It has been around 22 years since I last raced. This weekend brought back some very nice memories of being out on the water. It was great to see some old timers’ race with the newer generation of windsurfers. The idea was to have fun but also to start reviving the sport in Malta” – Jean Paul Fleri Soler – Long Board Class Winner

Trophies were presented to the winners by John Huber, Chairman of Yachting Malta, who lauded the efforts of the Malta Young Sailors Club for bringing this initiative to fruition. He also expressed satisfaction at the successful collaboration between Yachting Malta and MYSC. He reiterated Yachting Malta’s commitment to supporting competitions of this nature which could possibly lead to international events in the near future.

Wrapping up the weekend was Karl Miggiani, one of the event’s organisers, who explained that the enthusiasm shown by those present resulted in the plan to have four events per year.  A calendar of events will be drawn up shortly and published on the Club’s website.  He concluded by thanking Yachting Malta and the St. Paul’s Bay Local Council for their support.

Malta Young Sailors also announced that a donation, part of the proceeds from the Registration fee will be donated to Zibel, a voluntary organisation and NGO focused on environmental education, awareness, solutions and research.