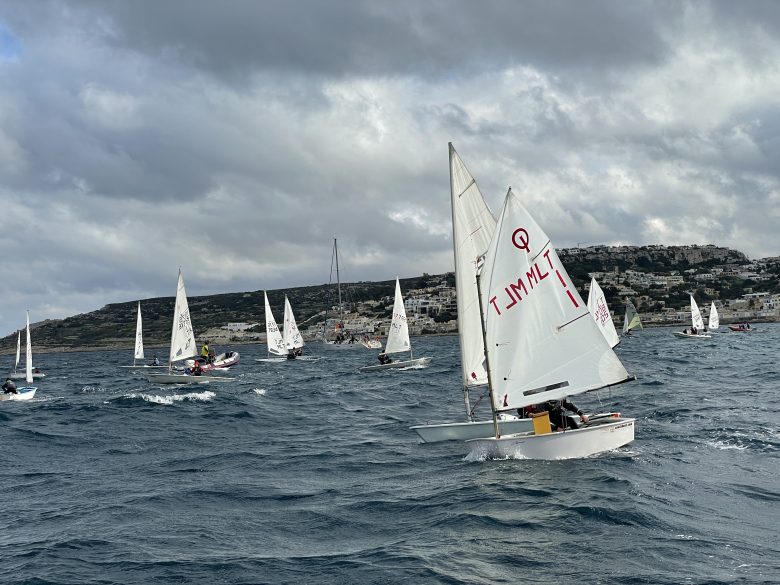 The second day of the Mapfre Middlesea Yachting Malta Christmas Regatta hosted by Malta Young Sailors Club went according to plan when the Optimist, Laser and RS Feva fleets competed in three races under the watchful eyes of Race Officer Peter Dimech.

Weather conditions were slightly tougher than yesterday with winds reaching approximately seventeen knots, whilst a northern swell continued to hit the bay throughout the day.  Despite a threat of possible heavy downpours early in the afternoon, the rain did not materialise, allowing for the third race to proceed without further hindrance.

Following the second day of racing, positions in the Optimist Novice, Optimist Cadet and Optimist Open changed, whilst the same placings for the Laser 4.7, Radial, Standard and RS Fevas remain unchanged.

In the Optimist Novice, Jack Gabriele (MYSC) retained his first placing with two wins and a second place.  Katrina Micallef (RMYC) who was in second place yesterday shifted down to third place.  Matthew Camilleri (RMYC) who gained two second places and a first took second place for the day knocking off Luca Schembri Meli (RMYC) from his third spot.

It was an all MYSC trio in the Optimist Seniors fleet, with Nico Drescher producing the best result of the day in this category.  Both Eric Fenech Pace and Ben Vassallo slipped to one place to finish the day in second and third place respectively.

The Laser Category, was not short of action with the sailors who registered the best results yesterday being continuously challenged throughout the day.  Nevertheless, in all categories, there were no changes to placings, which will make for an even more interesting day on Sunday.