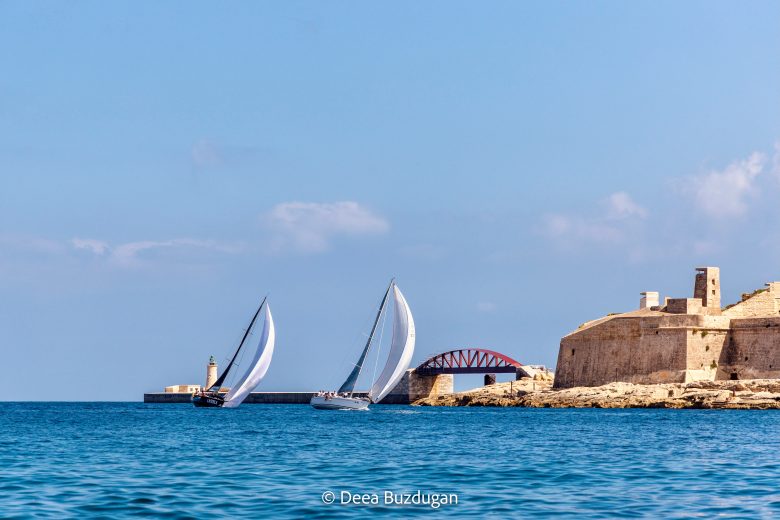 The Royal Malta Yacht Club and the Lega Navale Italiana hosted the sixty first edition of the Malta – Syracuse Race over the weekend.

The customary race briefing took place on the evening before the start and was followed by a reception, hosted by Yachting Malta at the Lega Navale for race officials and participants.

Alternating annual directions of sailing meant the, sixteen boat fleet departed from Syracuse on a 110 nautical mile course to Malta.  This year the race course has been slightly modified, increasing the distance and time limit, which will enable it to be included for ranking points in the Lega Navale Italiana FIV Offshore Trophy (Trofeo d’Altura).

The start of the race, outside Syracuse’s Porto Piccolo, was eventful.  With the fleet  expecting a sedate start, winds gusting around 30 knots caught the fleet unawares causing a flurry of activity both  on the start line as well as the boats  progressed  round the windward mark.

From the Maltese boats, Ramon Sant Hill’s Comanche Raider III had a very good start eventually taking the lead with a slight gap over  Salvatore Maggiulli’s Engi. As the fleet reached Capo Murro di Porco, Engi gained ground over the fleet having been closer to land.  From then positions started changing. The ever present Ottovolante shadowing Comanche Raider III, who once again gained substantial ground over the two Italian boats to gain a comfortable lead. This advantage was cut short when storm damage to the bow section caused the Maltese Farr 45 to retire.

Race favourites Artie (Lee Satariano) and Ton Ton Laferla Insurance (Jonathan Gambin) had a relatively unimpressive start but quickly pushed their way to the front of the fleet, bypassing Engi, Zenhea Takesha and Ottovolante as they reached Capo Passero.

Reaching the northern tip of Gozo,  Artie maintained a comfortable lead over Ton Ton which also managed to create a gap between Ottovolante, Corona (Sara Baldwin/Luis Azzopardi) and Zenhea Takesha.  Becalmed south of Gozo, Artie saw its substantial advantage eaten away by the following pack. The same fate was also experienced by Ton Ton who ended up being overtaken south of Gozo after having  held a dominant position for most of the race. With winds dying down in the Comino Channel, the gap between Artie and the fleet started to dimish causing the fleet’s progress to halt substantially.

Artie’s superiority however continued, enabling him to establish a new course record when they crossed the finish line at 11:45:11hrs.

Around the same time of Artie’s finish, Ottovolante, Corona and Ton Ton had rounded the northernmost tip of Malta. By the time the trio reached Baħar iċ-Ċagħaq, Corona fell back leaving Ton Ton and Ottovolante to continue their close battle. Reaching the Fairway Buoy, Zenhea Takesha joined the fray, with Engi tagging along in the background.

It took the frontrunners considerable time to round the mark before heading into Marsamxett for the finish line, with Ton Ton and Ottovolante neck to neck until the very end.  Ultimately it was Ottovolante who prevailed, finishing the race fifty one seconds ahead of Ton Ton.

With ratings coming into play, it was Ottovolante, Ton Ton Laferla Insurance and Jonathan Camilleri Bowman’s Maltese Falcon II who took the top three prizes in IRC of the race.

In the hotly contested ORC class, Malafemmena proved once again to be the perfect boat for the light conditions, eventually taking the overall ORC podium followed by fellow Italian boats Ottovolante and Engi with Ton Ton coming in 4th and the leading Maltese boat on ORC.

As a result of the challenging weather conditions, seven boats retired.

The Yachting Malta – Syracuse Race came to an end in the evening when main sponsors Yachting Malta hosted a Prize Giving evening at the Royal Malta Yacht Club.

The Club expressed its gratitude towards Race Officer Peter Dimech and volunteers  Edgar Warrington, Luca Lacitignola, Alfred Caruana for assisting with finish line duties and Maurilio Carpinteri from the Lega Navale for his assistance in the scoring process.