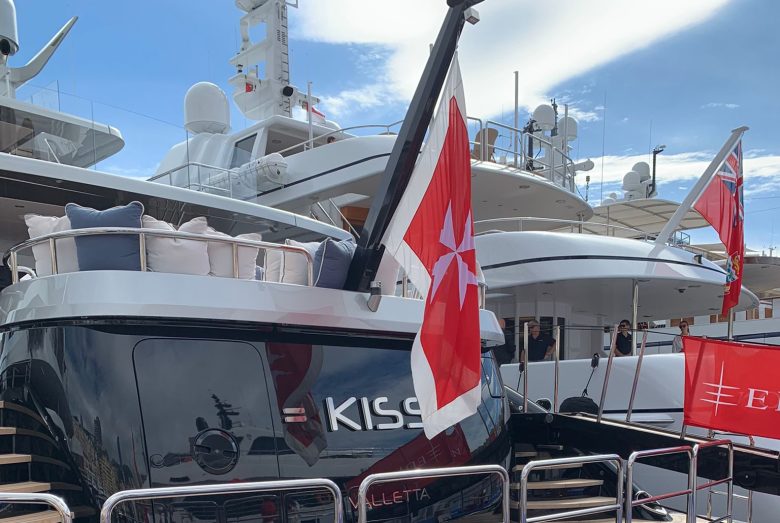 Following an absence in 2020 and a restrained show in 2021, due to the Covid 19 pandemic, the Monaco Yacht Show returned to its full splendour on the last weekend of September.

Inaugurated in 1991 and spread over 4 days, the Monaco Yacht Show has established itself as the leading Superyacht show. A sizeable delegation from Malta was present, aiming to showcase Malta’s potential in the yachting and maritime industries.

Malta has become Europe’s largest superyacht jurisdiction, a testament to the efforts the Malta Ship Registry has put in. The significant number of Maltese-flagged superyachts that graced the quays of Monaco’s harbour brings immense pride to Malta.

“The fluttering of the many Maltese maritime ensigns with the emblematic eight-pointed cross is a sight to behold” – Michael Mifsud, Chief Executive Officer, Yachting Malta.

But more than a flag and jurisdiction exposition, the Monaco Yacht Show brings to the fore, the standing Malta Yachting sector enjoys on the international scene and ties in exceptionally with the steps currently being taken to draft the new Superyacht policy.

The Minister for Transport, Infrastructure and Capital Projects.Dr. Aaron Farrugia’s earliest commitment to the Yachting sector, was the launching of a New Superyacht Policy at the recently held Malta Superyacht Symposium. This new policy aims to harness the vast positive impact that this industry can leave on our economy. Malta’s potential in this sector reaches far beyond the selling of Superyacht Registrations and the fiscal incentives that go with it. This potential has been reiterated by many over the years. Now it is time to put it into action.

Malta’s status as a maritime nation goes back far beyond 1973 when the Maltese Maritime Flag formally came into existence with the declaration of the Merchant Shipping Act of the Laws of Malta. Malta’s natural harbours together with its skilled and hardworking workforce were noticed by foreign militaries. Over the years, ex-servicemen visited the island in their yachts whilst active servicemen sparred with Maltese yachtsmen in the natural playground surrounding our island. Our ship repair skills coupled with our bi-lingual population enabled most yachtsmen to feel at home in our harbours and facilities.

Present along with the Malta Ship Registry the Darse Sud enclosure were representatives of several Maltese industries which had their dedicated stands offering a multitude of services and attracting a hive of activity with a constant flow of enquiries from yacht owners, brokers, skippers, and captains.

“Having a substantial Maltese cluster nearby is very beneficial and highlights our agility and our “yes we can” approach. The Maltese traditional offering is ever evolving with new facets like crew training establishments and innovative connectivity providers mingling and networking amongst the market leaders in the field. The networking and business development opportunities were the key important objectives of the Maltese contingent.” remarked Mifsud.

Adding to the above is the pride of having a strong Maltese presence at all the conferences and conventions during the Show, where Malta was not only represented by a significant amount of delegates but also through contributions by moderators, panellists, and experts. It is evident that like in many other sectors we punch well above our weight.

Yachting Malta is not simply an enabler for Maltese industry players. Although Yachting Malta has supported their initiatives to attract increased, quality business to Malta, Yachting Malta is putting in strong efforts to attract potential superyacht events to Malta. This is being done by networking with key players in the industry and giving them first-hand information as to what Malta has to offer in terms of the latest sustainable trends, expertise and one of the most scenic locations in the Mediterranean.

“The Monaco Yacht Show is the perfect occasion, where Malta can showcase its potential, and this is Yachting Malta’s primary aim. The enthusiasm with which Malta was greeting augurs well for the industry and Yachting Malta will continue with this momentum.” concluded Mifsud.