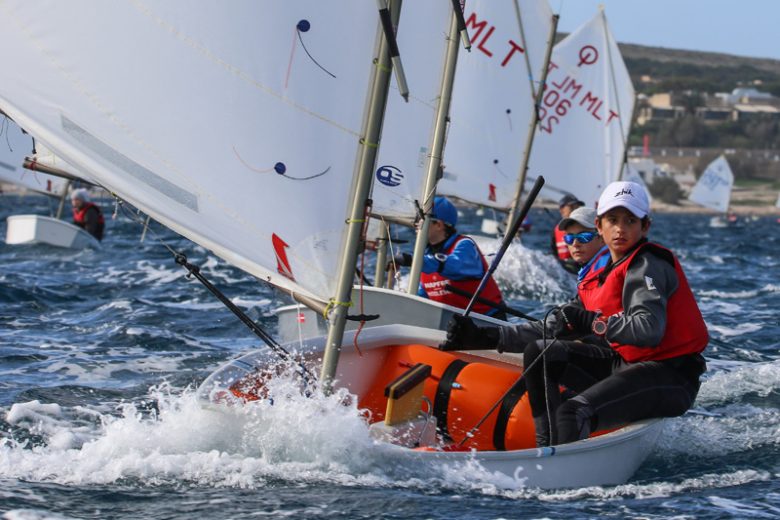 Four days of intensive sailing draw to a close

The Mapfre Middlesea Euromed Regatta, hosted by Malta Young Sailors Club under the auspices of the Malta Sailing Federation drew to a close early on Sunday afternoon when the last races of the Championships were held in Mellieħa Bay.

Race Officer Peter Dimech gave insight as to the overall proceedings of the Championships which saw the Optimist Fleets sail a total of seven qualifying races after which the fleet were split into Gold, Silver and Bronze fleets. Whilst the Gold and Bronze Fleets sailed five races in the final stage, the Silver fleet saw only four races being held. The Beginners fleet were kept ashore due to the wind strength, which topped 36 knots at a certain point.  The Laser Class sailed a total of ten races, two of which were held early on Sunday morning.

The Silver Fleet Senior podium was made up of Mia Klaboe (NOR), Finian Morris (GBR) and Luke Turvey (IRL), whilst the top ranking Maltese sailors were Danjel Fenech (Birzebbugia Sailing Club), Leonardo Procopio and Flynn Mifsud – both Malta Young Sailors Club.  In the Cadet Division, Jonas Micallef was in first and 9th overall. He was followed by Pierluigi Taccon Acton (ITA) and Artem Cherpita (RUS).

Places changed for the trio that were in the top rankings for the Bronze fleet until yesterday. Giuseppe Gaetano, won the division followed by Oscar Morgan Harris (GBR) and Marta La Greca (IGZ).  Matthew Cachia Debono, Maximilan Formosa and Andrene Azzopardi, were the top Maltese sailors in the Bronze Senior Fleet.  Wrapping up the results were the Bronze Cadet podium which was made up of Daniil Iarchenkov (RUS) ,Gilda Nasti  (ITA) and Simone Paturzo (ITA). Oliver Drescher, Emily Fenech and Nicolai Bartolo were the Maltese with the best results in this division.

There were no races for the Beginners’ Class, therefore placings remained unchanged from yesterday, meaning that the podium is made up of Alexander Fastenko (RUS),  Felix Mulder (HKG) and Veronika Basalkina (RUS). First Maltese in this class was Poyraz Fidanboy (Royal Malta Yacht Club) who was just one point away from third place.

The Laser Radial Fleet saw Gregory Mifsud win the two races of the day, thus securing an overall second place on the podium.  Rankings leader Zachary Zammit, who is suffering from a niggling ankle injury, had to settle for second place in the first race and did not compete in the second race. Nevertheless his performance throughout the duration of the championship saw him secure the overall title.  Matthew Micallef who had been consistently second throughout the first three days had to settle for third place just one point behind Mifsud, making it an all Malta Young Sailors’ Club podium for this Category.

“The 20th edition of Mapfre Middlesea Euromed Regatta has been a success.  The event has grown and keeps attracting some very high level sailors which really puts Malta on the international sailing map and gives our local sailors a wonderful opportunity to race against some of the best sailors in Europe – case in point is Alessandro Cortese, European Optimist Champion and Anja Von Allmen – Under 21 World Champion Laser 4.7. Of course Malta Young Sailors is particularly proud of its sailors who performed so well in this championship,” enthused Chris Bajada, Commodore, Malta Young Sailors Club.  “There are no words to describe the satisfaction and gratitude that we have towards the volunteers who have put in so much hard work, not just during the event but also in the months leading to it. Of course this event would not be possible without the collaboration of Mapfre Middlesea plc and Yachting Malta who have been supporting this event for a number of years”

Malta Young Sailors Club will be hosting the 21st Edition of the Euromed Regatta will take place between the 19th and 22nd December 2020.