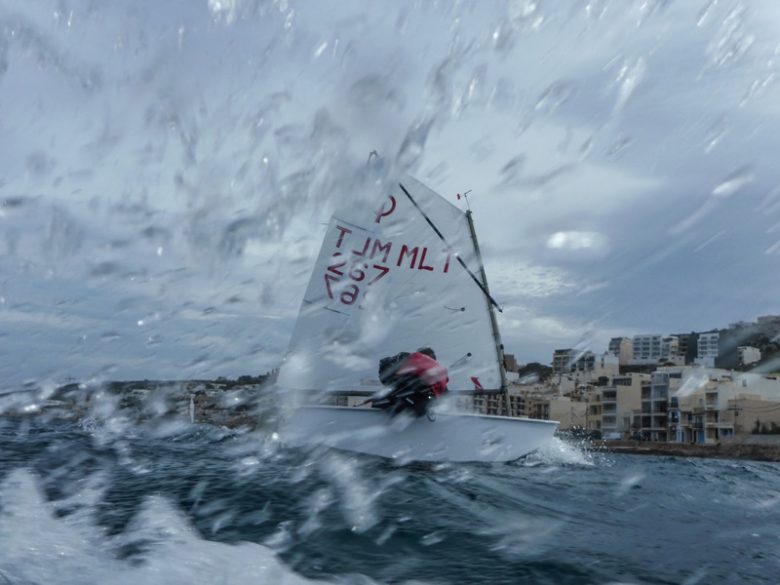 The optimal conditions experienced yesterday were short lived and the third day of the Mapfre Middlesea Euromed Regatta has proven to be, by far, the most challenging for the 230 strong fleet which raced in winds of approximately 19 – 23 knots.

The strong winds that reached up to 37 knots further out of the harbour resulted in racing taking place closer to the shore. One race being held in the morning before the fleet was called back in by the Race Committee.  After being on stand by for approximately two hours, the Optimist (Senior and Cadet) fleet returned to the water where they managed to compete in a further two races.

Following the results of the previous two days, the Optimist Cadet and Senior fleets were split into Gold, Silver and Bronze fleets.

In the Senior Gold Fleet, despite a bit of a shaky start, European Champion Alessandro Cortese has slowly climbed up the rankings and is now currently in second place behind Tommaso de Fontes who has had a consistent run throughout.  In third place is Michele Luigi Adorni. The top three Maltese sailors for this category are Antonio Gasperini, Nicolas Drescher and Benjamin Vassallo. Meanwhile in the Cadet Gold Fleet – Eric Fenech Pace, maintains his top ranking in this category followed by Timmy Vassallo. Third in this category is Russian Nicholay Larchenkov.

In the Beginners’ Class, the fleet had one race in the morning. Leading sailor Alexander Fastenko did not compete this morning, whilst second placed Felix Mulder retired. Despite this, both still retain the lead they established from the two days of racing. In third place was Veronika Basalkina, who won the only race of the day for the class.

It was just one race in the morning for the Laser 4.7 and Radial fleets on Saturday morning.  Perhaps the most notable action of the day was the act of sportsmanship by Anja Von Allmen. With just ten minutes to go for the start of the race, Under 21 Laser 4.7 World Champion Von Allmen noticed that American sailor Liliann Lucas had capsized and was struggling to get her boat upright. Von Allmen, knowing full well that the race was not going to be postponed and could have easily lost the start, sailed over to Lucas, pulled her out of the water and helped her get on the boat just in time for both to start the race.

Cool and collected, after having successfully helped Lucas to the start of the race, Anja Von Allmen continued her winning vein to remain in top position. Today’s racing saw second place being taken up by George Erik Ristall, whilst Lacey Aquilina came in third place.  These results did not affect yesterday’s rankings, with Von Allmen maintaining a comfortable advantage over second placed Saul Vassallo. Nevertheless Vassallo has maintained a constant performance throughout, leading over third placed George Erik Ristall with four points.

In the Radial Class, the win for the day was taken by Gregory Mifsud, yet Zachary Zammit maintains his overall lead, followed by Matthew Micallef.  Mifsud’s performance today enabled him to climb to third place.

All results are currently provisional.

The final day of Racing takes place on Sunday 22nd December. Weather permitting racing should start at 10:00am. Prize Giving will be held on the day at 6pm.   For latest updates and official results please visit https://euromed.maltayoungsailors.com/