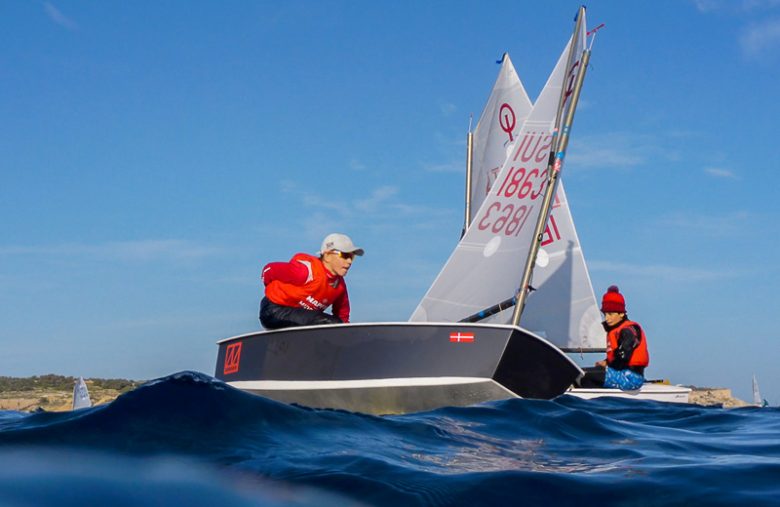 Mapfre Middlesea Euromed Regatta continued today, when the second day of racing took place under clear blue skies and warm temperatures despite being in the thick of December.

The fleet enjoyed optimal weather conditions with light winds and a negligible swell.

The weather conditions resulted in both the Optimist and Laser fleets adding in an extra race, meaning that four races took place over the course of the day.

Eric Fenech Pace maintained the lead obtained yesterday in the Cadet Division. Behind him remains Timmy Vassallo, whilst in third place Russian Nikolay Larchenkov took over from Pavel Guschin.

Similar to the other Classes there were no changes to the first and second placed sailors in Beginners’ Class. Alexander Fastenko and Felix Mulder retained their placings, whilst Elizaveta Chekhlatay beat Malta’s Poyraz Fidanboy with a two point advantage to take third place.

The  Laser 4.7 Class continued to be dominated by the Under 21 World Champion Anja Von Allmen who has remained unbeaten. Saul Vassallo retained his second place, however Matthew Flores narrowly missed out on retaining his third place having been pipped to third place by Georg Erik Ristal.

In the Laser Radial Class, no changes to yesterday’s placings.  Zachary Zammit had a very postive day registering four wins out of four races.  Behind him were Matthew Micallef, and  Estonian Kaspar Raus.

All results are currently provisional.

The Mapfre Middlesea Euromed Regatta is being hosted by Malta Young Sailors, under the auspices of the Malta Sailing Federation. The Regatta is sponsored by Mapfre Middlesea plc and supported by Yachting Malta Ltd. Race Management duties are being undertaken by Peter Dimech, John Coveney and Bojan Gale, who are being assisted by a number of officials and volunteers.