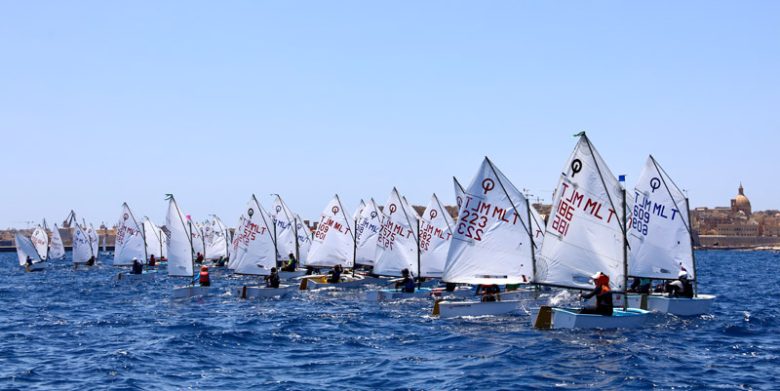 The Royal Malta Yacht Club hosted the first events related to the Yachting Malta Race Week over the weekend, when the National Dinghy Ranking Regatta welcomed around 100 sailors. The sailors, who represented all local sailing schools, competed over two days in the Optimist, ILCA, SB20, RS Feva and Topper Classes.

Weather conditions over the weekend favoured the fleet enabling them to sail all the scheduled races. Saturday’s conditions were relatively stable with wind speeds averaging between 13 to 15 knots with a moderate swell.  Sunday’s winds were shifty, allowing for the first two races to take place.  The third race had to be abandoned due to a 90 degree windshift, immediately after the ILCA Class 6 start.  The Optimist Beginner fleet struggled in the light winds with several sailors being caught out well behind the first finishers.

Following a temporary halt to allow for a new course to be set up to make the most of the new wind direction, which eventually died down just in time for the last race to take place, allowing for the fleet to complete the full course within the stipulated time frame of 40 minutes.

The ILCA fleet saw races taking place in the Class 4 and Class 6. In the former Class, Jake Mallia (BSC) had a good run beating off competition from Benjamin Vassallo (MYSC) and Daniel Ciantar (BSC) who finished in second and third place respectively.

Class 6 was BSC affair, with siblings Shaun and Lacey Aquilina who finished in first and second place. Joining them on the podium was Matthew Flores in third place.

The SB20 Association Malta held races on the Saturday, with Catherine Hurley & Kristian Borg Nicolas’ Careful Now making it a first place in all the four races held.   In the Topper Class, the fleet was represented by crews from the Vikings Sailing Club, with Kathleen Sammut Bowman making a clean sweep of all races.  The RS Feva class saw an all-RMYC fleet, with Michaela Vertsoni and Nicole Siegler  winning the overall regatta.

Prizes were given out to the winners by RMYC Commodore David Cremona and Yachting Malta General Manager Michael Mifsud during the Prize Giving event hosted by Yachting Malta.

Overseeing the race was Race Officer Peter Dimech, whilst Race Management duties were undertaken by Adrian Gauci Borda and a team of volunteers.

“It was great for the Club to welcome sailors from local sailing schools. The hive of activity – both off and on the water, generated from such events is always enjoyed by all” commented David Cremona, Commodore, Royal Malta Yacht Club.  “The weekend would not have been possible without the support of the MYSC mark layers, BSC safety leader and pin end committee, start and finish teams from BSC, VSC and MYSC and of course the Yachting Malta Committee boat. Last but not least the coaches for making sure their young sailors performed well and most of all were happy!”

Yachting Malta Chairman John Huber noted with satisfaction the participation at this event and remarked that the objective of the Yachting Malta Race Week is to provide more exposure opportunities for local talent. The enthusiasm with which the sailors competed in this event was notable and promises well for the future of the sport.

Official Results can be downloaded from the RMYC website https://www.rmyc.org/event/2022-yachting-malta-race-week-national-dinghy-ranking-regatta/

The next events on the Yachting Malta Race Week Calendar continue on Friday afternoon when the Veuve Clicquot Round Linosa Race and the Voomquest Enemed UIM V2 World Championships take place.