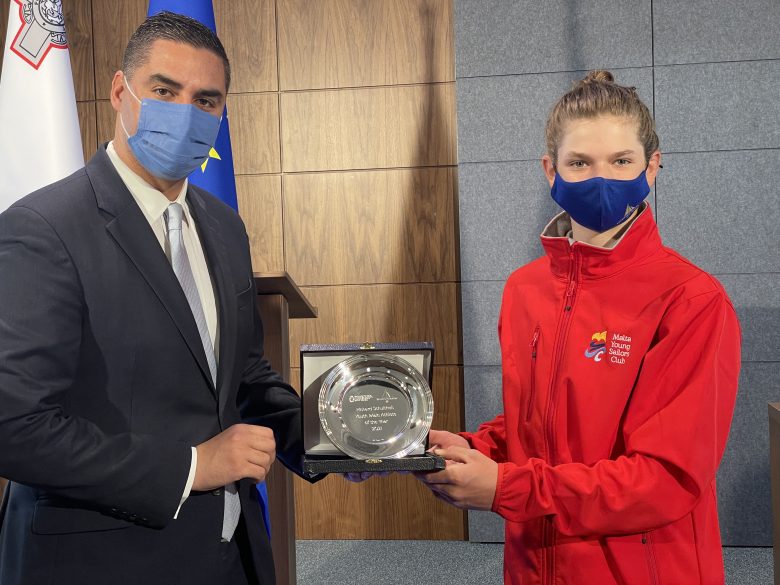 Yachting Malta Chairman John Huber and the Hon. Dr. Ian Borg, Minister for Transport, Infrastructure and Capital Projects presented Young Athlete of the Year Richard Schultheis with a commemorative plaque for his outstanding success in the sport of Sailing.

Schultheis was recently awarded with the coveted Young Athlete of the Year Award during the Sport Malta Awards, organised by the Malta Sports Journalists Association.

Competitively sailing for a number of years, he has made a name for himself and Malta in the sailing circuit and is considered to be one of Malta’s Olympic hopefuls.

In a short address, Minister Borg highlighted the objective of Yachting as an important economic sector. In 2015, Projects Malta identified Yachting as an area of interest and together with the Royal Malta Yacht Club launched Yachting Malta.

“Today’s presentation, is not only to recognise Richard’s achievements but also to send out a message to stakeholders that the Ministry and Yachting Malta will continue to encourage and assist their efforts to develop the industry and sport. This is already being done with the donation of boats to local Clubs that took place recently amongst other initiatives.”

The Minister continued by expressing the importance of Malta as an international yachting destination and was looking forward to make some important announcements in this respect in the near future. He concluded by congratulating Richard and thanking him for his commitment to the sport for which he is a worthy ambassador.

“We are privileged to have Richard in our sailing community. His commitment and dedication to the sport is commendable. It was only appropriate that Yachting Malta as the government entity involved in yachting recognises the first young sailor to win this accolade.”